The clash between workers and the police at Surat is only first spark of coming revolts! 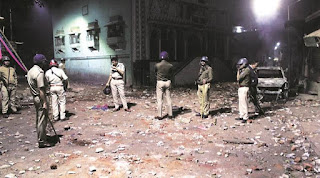 Gujarat Police has arrested over 90 migrant workers in Surat for defying the lockdown orders, in force since 25 March. The incident happened last Sunday, 29 March, when over 500 workers took to the streets in Ganesh Nagar and Tirupati Nagar areas of the city demanding arrangement of transportation facilities to reach their respective home towns.

30 vehicles were torched and several workers and policemen were injured in the clash after police used force to disperse the crowd of agitating but unarmed workers.

Both the localities of Ganesh Nagar and Tirupati Nagar which comes in Pandesara region of the Surat city are hubs of migrant workers working in different powerlooms and textile manufacturing units. Most of them belong to the states of Uttar Pradesh and Bihar. More than 500 such workers gathered on 25 March amidst the fear created by the loss of livelihood and being far away from their families in such a situation.


As per the police officers present at the spot, the protestors allegedly started pelting stones when the police tried to disperse them from the area. The police, in turn, fired no less than 30 tear gas shells on the crowd to control the situation. Deputy Commissioner of Police Vidhi Choudhary said, “The police tried to convince them that it is not possible since buses or trains are not available...However, the workers refused to budge, and started pelting stones at police.” He further added that the workers destroyed several police vehicles during the clash, after which, the officers arrested 93 of them. According to an official, an FIR was lodged against those 500 workers in the local police station. The charges put against them include “rioting, attacking police, damaging public property and also under provisions of the Epidemic Diseases Act for defying restrictions,” said the official.

This is not the only case where frustration of the workers during the lockdown got vented. A few days back, states like Delhi and Punjab witnessed a huge exodus of migrant workers to UP and Bihar. The inability of the state governments to provide proper rehabilitation facilities to poor section of the society has compelled them to embark on foot journeys to their home towns. Some people were reported to walk over 400 km to reach UP and Bihar with their families. The government has responded by keeping them stranded on the borders and later throwing them like animals in district schools for 2 weeks of self-isolation.

The total confirmed Coronavirus cases in India stand 1,841 hitherto, out of which, 45 have been reported dead. Although the overall figures may look to calm nerves at first instance, the rate at which the numbers are increasing day by day leaves little scope for improvement in the coming days. The nationwide lockdown in the country was declared on 25 March in an announcement made by Indian Prime Minister Narendra Modi. The cases of police brutalities upon the poor, mass exodus of migrant workers and the crumbling health infrastructure on the days following the announcement have proved the government’s inability to provide any hope to the masses. The callousness of Central and State governments in the backdrop of the spread of the disease, is reflected in the increased exploitation and vicious suppression of the toiling masses.

The lockdown has also done its part in removing the curtains from the abyss of cruel wealth distribution among different classes of people. On the one hand, there exist luxurious accommodation facilities and top-class healthcare services for the elites, the poor are getting nothing but lathis, tear gas shells, and the curse of the government for the spread of Coronavirus.

Nonetheless, the virus is developing faster than all attempts of the ruling elites to defend themselves and class conciliation. All class contradictions have become starker than ever and the real role of police, army, and the state authorities in maintaining the criminal rule of capitalists over the toiling people, is getting clearer day by day. The crisis is breaking the age-old shackles of the working class and removing the fog that the ruling elite has created for long. The masses are starting to move, realizing that there is nothing to be preserved in the system. The incident of Gujarat is only first spark of a series of revolts by the masses, that are on the anvil during this crisis.

Posted by worker socialist at 22:48

Email ThisBlogThis!Share to TwitterShare to FacebookShare to Pinterest
Labels: The clash between workers and the police at Surat!