Immigrant poor become worst sufferers as corona crisis is compounded by the lockdown! 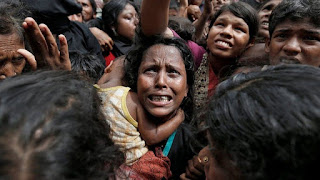 The Coronavirus pandemic has clasped the world entirely with the European nations and the USA being the most affected regions. Thousands of deaths and new cases are being reported every day, which have completely exposed the hoax of ‘robust healthcare’ infrastructure of these developed countries. China, despite being the epicenter of the crisis, has recovered completely but the threat of the pandemic continues to haunt most of the Asian countries, particularly the poor nations of South Asia. India, Pakistan, Myanmar, Bangladesh, Sri Lanka are probably going to be the worst hit. Given their inability to control the virus from the spread, the governments of these countries have resorted to barbarous clampdown upon the poor. Myriad workers and other vulnerable groups have lost their livelihood and are now in the middle of a drowning island. Facing the double brunt- the menace of Coronavirus at one hand and the hatred of the government at other- are the immigrant poor and refugees, virtually men and women with no land.

One such group are Rohingya Muslims who live in different regions of South Asia and are on the brink of a serious catastrophe. Over 40,000 such refugees are living in India for the past few years after they were forced to leave Myanmar after a prolonged spate of genocide. The Indian government has not only turned its back but also taken coercive measures to ensure that no proper rehabilitation is offered to the community. The BJP government, throughout the last 6 years of its rule has treated them like rodents and termites. Now, this pandemic has added to their misery. The families living in refugee camps across the nation have started facing acute food shortages. In Haryana’s Nuh district’s Ward No. 7 where 400 Rohingya families have taken shelter are living in extreme congestion. The families for whom getting a soap is no less than a luxury, having protective equipment- a mask or a sanitizer- is a distant dream.

The local municipal bodies are also ignoring the rehabilitation settlements completely pushing them to conditions, far worse than the slums. While disinfecting the region the authorities are skipping the slums intentionally- of course on the orders of the state and central governments. On 26 March, after a day of the announcement of countrywide lockdown by Indian PM Narendra Modi, a non-profit organization based in New Delhi named Rohingya Human Rights Initiative (ROHRInga) conducted a medical survey of around 350 people in the slum of Ward No.7 and found 37 of them having corona symptoms such as fever and cough. Sabber Kyaw Min from ROHRIinga said, "There is a serious risk of coronavirus outbreak in Rohingya refugee slums." He further added "The Indian government is protecting its people while international organizations such as UNHCR (the United Nations refugee agency) have turned a blind eye towards us. We are literally left alone to fight this pandemic."

Around 1200 Rohingya families are living in the Jammu district of Northern India. Most of them worked in walnut factories, which are now closed due to lockdown. These families are on the verge of facing acute hunger, some have already started skipping meals to save something for the coming days.

The Rohingya community is facing similar wrath of the government in Bangladesh, where experts say that the refugees are highly vulnerable to getting infected, which in turn, would spread the virus like fire in the entire camp. The Kutapalong camp in Ukhia, Cox's Bazar of Bangladesh is the world’s largest Rohingya refugee camp with over 6,00,000 people. The public authorities have advised maintaining atleast 2 meters distance as one of the key norms of social distancing. However, the people in the camp are living in extremely crowded shacks. Some first-hand reports suggest that over 12 people live in a shack that measures not more than 10 square meters. All these make ‘social distancing’ nothing but a joke. In addition to this, the Bangladeshi government has not assuaged any of its cruel crackdown measures on these refugees. It has shut down the internet connection in the camp, which has left the residents with no way to get aware of the pandemic in general and the disease in particular. The authorities have also cut access to 34 refugee camps across the country from outside so that all news of spread of the virus remains confined to the precincts of the camps.

A similar news has come from Malaysia where the state has been hunting around 2,000 Rohingyas who attended a religious gathering a few weeks back that resulted in a spike of Coronavirus cases in the country. More than 1,00,000 Rohingya Muslims live in Malaysia after fleeing military crackdowns in Myanmar. Although the government is assuring free health checkups and treatment if needed, but fear has gripped the people of the community, which is quite natural for them after suffering a pogrom in their home country.

Coming to Myanmar itself, the country is struggling with its lousy health infrastructure. A considerable section of its population does not have access to even basic healthcare amenities, leave aside the ones living in refugee camps. The Rakhine state, which once, had been home to Rohingyas before the state-sponsored genocide routed them out, now lacks proper drinking water and minimum sanitation facilities. The region now hosts a number of Rohingya camps who apart from being alien to most basic human rights are now also at the highest risk of Coronavirus threat. Over 1,30,000 Muslims live in open slums in that area. Maintaining social distancing in such a crowded place is far from realization, which is also clear from the fact that there is only one toilet for every 40 people.

Myanmar, which shares over 2,200 km long border with China, earns significant revenue from tourism. Over 7,50,000 Chinese tourists visited the country last year. Despite this, there have been only around 20 positive cases, thanks to the extremely poor testing facilities and low rate of testing.

It is not only the Rohingya Muslims who are at the peak of this vulnerability. The entire immigrant population of the world shares more or less the same fate. The starkest example can be given of India, which after conducting NRC (National Register of Citizens) exercise across its Assam state has declared nearly 1.3 lakhs people as foreigners late last year. Not to miss, more than 19 lakh people have failed to make their names included in the final NRC list. The state had also put over 1,000 such ‘immigrants’ in 6 detention camps, out of which, 29 have already died there, whose bodies were handed over to the families. The people in those detention camps are also on the edge of severe ruination if the Coronavirus infection reaches the camps. The government authorities also have turned a blind eye to the lives of these poor people. 250 out of those detainees had also held a hunger strike in 2018 against the inhumane treatment by the administration but that too went nowhere and no reporting was done as well.

All these facts reveal the monstrous nature of Capitalism, which segregates the poor into nationals and foreigners and exploits and represses them ruthlessly on such basis. However, the rich are cosmopolitan. They can settle in any part of the world and can live peacefully until their last breath. Most of these elites also get citizenship of the country of their choice. It is the poor only who have to go through the fencings of the reactionary and barbaric citizenship laws. But this cannot continue for long once the working and toiling people start to move together. For this, a push is already made by the coronavirus pandemic. Poor are regaining consciousness that the wealth of the whole world is created by them, upon which the Capitalists are sitting and maintaining their unjust rule. It is for the working people to break the shackles of exploitation that reserve national boundaries for the poor while opening all frontiers to the rich to enjoy the opulence all over the globe.

The Capitalists are trembling as they are losing control over the virus spread. They are failing, during the crisis, even to provide ‘starvation wages’ to poor population, which they have done until now. Nonetheless, the crisis has made the poor to identify their class enemies in the rich. Soon, the working people of all countries will realize that the immigrants far from being their foe, are their true ally in the common struggle for their liberation from the yoke of Capitalism.
Posted by worker socialist at 01:34

Email ThisBlogThis!Share to TwitterShare to FacebookShare to Pinterest
Labels: As corona crisis is compounded by the lockdown immigrant poor become worst sufferers!